Marshall, the county seat of Harrison County, Texas, has a population of about 23,000 residents as of the 2020 Federal Census.

Its economy is strong and diverse, and the oil and gas industry continues to play a major role in economic development.

We've been visiting Marshall for literally decades, and always enjoy our time there!

Marshall Tourist Attractions and Things to Do

Founded in 1841, Marshall is a major city in the East Texas economy, and a large supporter of the arts community and historical preservation. It is often called the "Cultural Capital of East Texas".

Today, Marshall has more than 100 historical markers and medallions, such as the T&P Depot marker (see below), with several sites listed on the National Register of Historic Places.

Many of Marshall's Victorian homes have been restored, and several function as B&Bs. Also fully restored is the Harrison County Courthouse.

The Harrison County Historical Museum offers two locations in downtown Marshall. Visit and experience Harrison County’s rich history and culture through the decades. The museum features interactive materials for all ages, including kids.

The museum's 1901 Courthouse Galleries are located at 1 Peter Whestone Square, and the Memorial City Hall Galleries at 110 East Houston.

The Ginocchio, across from the T&P railroad station, is an 1896 vintage railroad eating house from the era when trains stopped every few hours for meals. The Ginocchio is a restaurant and bar with a simple mission - provide the highest quality food, beverage, and service in a truly historic and unique setting. Dine in its elegant dining room, historic bar area, or outside on the trackside patio!

The historic Texas & Pacific (T&P) Railway depot and museum (see photos below) is a major tourist attraction in Marshall, as are many other historical sites that showcase Marshall's long and varied history.

Located at 800 N. Washington Street, this ornate two-story brick station, once a major interchange point and division office for the T&P, has been restored to its former grandeur.

Marshall was the site for a major locomotive and car repair shop operated by the T&P. Marshall's impressive passenger depot, constructed in 1912, was once scheduled for demolition, but a determined effort by the City of Marshall preserved the building for future generations.

The historic marker at the depot (see photo below) documents the history of the T&P in Marshall.

For more information, visit the website of the Texas & Pacific Depot and Railway Museum 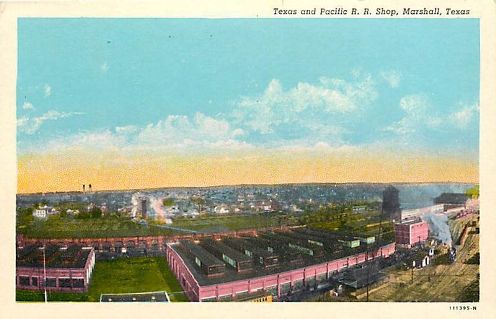 Marshall is well known for its "Wonderland of Lights," one of the largest light festivals in the country when lit during the Christmas season. It is the original and largest Christmas festival in Texas, first started in 1987.

The most recent annual festival was held on Wednesday November 24 through December 23, 2021.

Special events included the traditional lighting ceremony, the annual lighted Christmas parade, the Wassail Walk and an opportunity to catch a showing of “The Grinch” at the newly renovated Memorial City Hall.

As for the lights that adorn Marshall’s downtown area, they remained up until the beginning of January 2022.

Map of Showing the Location of Marshall in East Texas 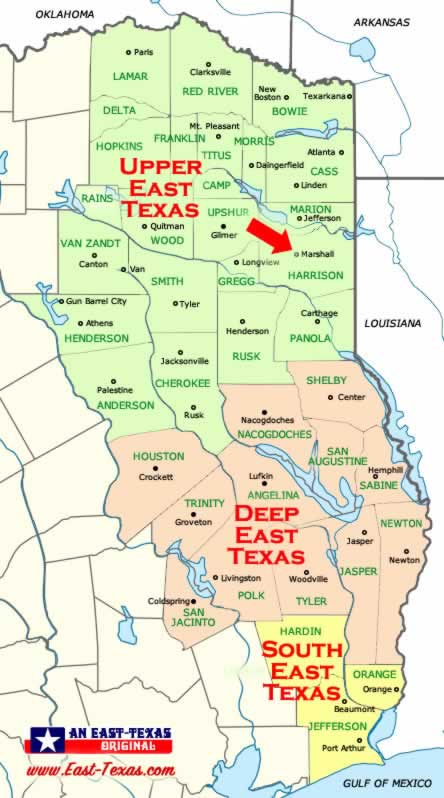 Additional Resources and Information about Marshall

For more information on Marshall, we recommend a visit to ...

Side Trip from Marshall to Nearby Jefferson, Karnack, Uncertain and Caddo Lake

While visiting Marshall, consider the short drive north to nearby Jefferson, Karnack, Uncertain and Caddo Lake.

Earlier Views of Marshall in the Texas Vintage Postcard Collection