Kilgore Texas: The City of Stars

Kilgore, founded in 1872, is located in Gregg and Rusk counties in Upper East Texas, and had a population of about 14,000 residents in the census of 2020.

It is situated on Interstate Highway I-20, U.S. Highway 259, and Texas Highways 31 & 42, 120 miles from Dallas, 200 miles from Houston and 70 miles from Shreveport. The City of Tyler is located west of Kilgore, Longview to the northeast, and Henderson to the south.

Attractions and Things to Do in Kilgore

Downtown Kilgore is a destination for residents and visitors alike. Surrounded by artifacts of its oil heritage like the 37 oil derricks that dot the downtown skyline as well as the preserved Art Deco buildings, downtown Kilgore continues to be a very special place.

Each Christmas, Kilgore lights up its derricks, helping the city maintain its title as the state's official "City of Stars." The lights are turned on the first Saturday after Thanksgiving and remain lit until after January 1.

Restaurants, salons, gift stores as well as two historic theaters are year-round destinations. A number of attractions are popular in Kilgore, such as:

For more information, be sure to check out Visit Kilgore and Kilgore Main Street, and the Kilgore Chamber of Commerce and the City of Kilgore websites.

The Oil and Gas Industry

The East Texas oil and gas industry dates from the 1930s, and continues to this day to be an important part of the economy and job market of Kilgore as well as Longview, Marshall, Gladewater, Van, Jacksonville and other cities and towns.

The history of oil and gas exploration in Texas is a long one, dating from the first major discovery at Corsicana in 1894.

In October 1930, the Daisy Bradford No. 3 well blew in Rusk County close to Joinerville and Turnertown, opening the East Texas field.

For more on the history of the oil and gas industry in Texas as a whole, we recommend you visit the Texas Almanac published by the Texas State Historical Association.

Kilgore is the site of Kilgore College, a well known institution of higher education, with more than 5,000 students. Founded in 1935, it is a publicly supported, two-year, comprehensive community college offering postsecondary educational opportunities.

The college is home to the world famous Kilgore Rangerettes dance and drill team. Since 1940, the Rangerettes are the world's best-known collegiate drill team, traveling from coast-to-coast and border-to-border in the United States and on several world tours.

In addition, there are other accommodations in nearby Tyler including a Hampton Inn, Holiday Inn Select, Hilton Garden Inn, Holiday Inn Express, Country Inn & Suites, Homewood Suites, Residence Inn, Fairfield Inn, and others.

While visiting the Kilgore area, you may want to take other interesting day trips in several directions: 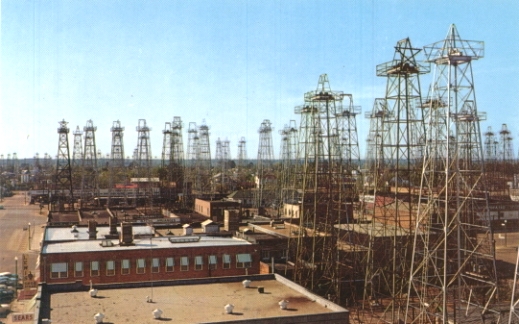