Texarkana: It's Twice as Nice!

Texarkana is unique in that it straddles two states on either side of State Line Avenue: Texas and Arkansas.

Located in extreme Upper East Texas, close to Louisiana and Oklahoma, and bordering Arkansas, is the twin-city of Texarkana. The Texas side of the city lies in Bowie County, while the Arkansas side is in Miller County.

Even its U.S. Post Office downtown has a state line running through the middle of the lobby of the building!

We've spent considerable time in Texarkana over the years, conducting business there, eating in its restaurants, shopping, and passing through on Interstate 30, heading for nearby Hope Arkansas. We have dined at local legends such as Bryce's Cafeteria for literally decades! Bryce's was opened in 1931.

Texarkana's Location in the Multi-State Region

Texarkana is a hub of regional interstate commerce, located 179 miles west of Dallas, and 145 miles east of Little Rock.

Texarkana is located near Fulton and Ashdown, Arkansas, and Hooks, Mt. Pleasant, and New Boston, Texas.

To the south, in Louisiana, are small towns such as Vivian, Homer, Haynesville, and Cotton Valley, Springhill, and the big cities of Shreveport and Bossier City. Seventy miles to the north lies the City of Idabel, Oklahoma.

In 2023, Texarkana is experiencing significant growth, and the completion of such infrastructure improvements as the Interstate I-30 project are positioning the city for growth into the future.

The construction of the $1.3 billion, coal-fired power generation facility in nearby Fulton has also spurred the economy and created new jobs.

Major medical facilities such as Christus St. Michael and the Wadley Regional Medical Center continue to position Texarkana as the major medical center of the entire multi-state region.

Texarkana Regional Airport (TXK) is located on the Arkansas side of the city, minutes away from the downtown area, local industries, and tourist destinations. American Eagle service to Dallas-Fort Worth International Airport (DFW) is available several times daily.

Also, a nearly $40 million project is now underway including not only a new terminal, but upgraded aircraft taxiways, parking lots, and jet bridges for loading passengers.

The airport is open 24-hours daily. Rental cars are available from Avis, Hertz and Budget.

Texarkana is also connected to the national rail service, Amtrak. Amtrak's Texarkana station is located in the east end of Texarkana Union Station, a historic and imposing buff brick structure which was opened in 1930.

Union Station is on the south side of downtown Texarkana at 100 East Front Street.

Read more about Amtrak in Texarkana

More Texarkana Attractions and Things to Do

Texarkana offers lots of things to do, for residents as well as visitors. It has  a number of annual festivals, entertainment from performing arts, stock car races, art exhibits, shopping, great outdoors and sports, and a wide array of restaurant cuisines.

For more information about Texarkana, we recommend a visit to these websites ...

Area Attractions in the Ark-La-Tex

While visiting Texarkana, the East Texas area, and southwest Arkansas, you may want to take other interesting side trips:

Texarkana KOA is also nearby for those traveling in RVs and travel trailers.

Texarkana offers a wide range of educational opportunities, both at the K-12 level, and university levels. Among the schools in the Texarkana area: 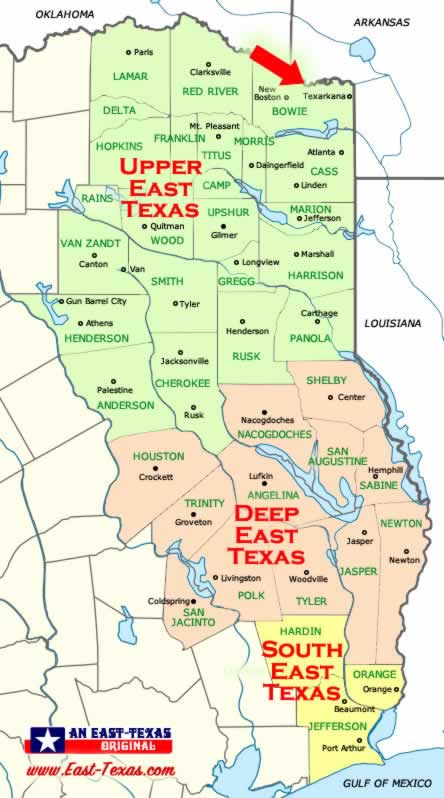 Due its location many regional highways, Texarkana has long been an overnight stop for many travelers, and hence there are a considerable number of tourist courts, motels and hotels. It is also a hub for trucking and railroads.

The Great Southwest Trail, for hundreds of years the main line of travel from Indian villages of the Mississippi River country to those of the South and West, passed by a Caddo Indian village on the site that later became Texarkana.

The Texas and Pacific Railway (T&P) Company laid out the Texas side of the town.