The City of Canton, the county seat of Van Zandt County, is located about 60 miles east of Dallas and 40 miles west of Tyler. Canton is the home of the famous First Monday Trade Days.

Today's permanent population is about 4,229 residents according to the 2020 Census. Five exits from I-20 serve Canton, with Exit 527, TX Highway 19, being the most popular for First Monday visitors and shoppers.

First Monday is considered the largest free flea market in the United States, and is held on Thursday - Sunday preceding the first Monday of each month.

This popular flea market is open one weekend a month and provides spaces for 6,000 vendors located on hundreds of acres.

It has become known by shoppers from all across Texas, Louisiana and Oklahoma as THE place to buy home decor, furnishings, antiques, clothing, crafts, jewelry, gifts, and collectibles.

And it is a favorite of vendors, dealers, craftsmen and artists alike as the perfect venue to market their wares.

There are two main routes to reach First Monday Trade Days when traveling from Tyler to Canton.

Texas Highway 64: is the shortest and most direct route, however it is a two-lane road. It is about 38 miles from downtown Tyler, and takes about 45 minutes.


Driving from the Dallas Area to Canton

The main route to reach First Monday Trade Days when traveling from Dallas or other Metroplex cities is via Interstate I-20. Driving time from downtown Dallas is about one hour. 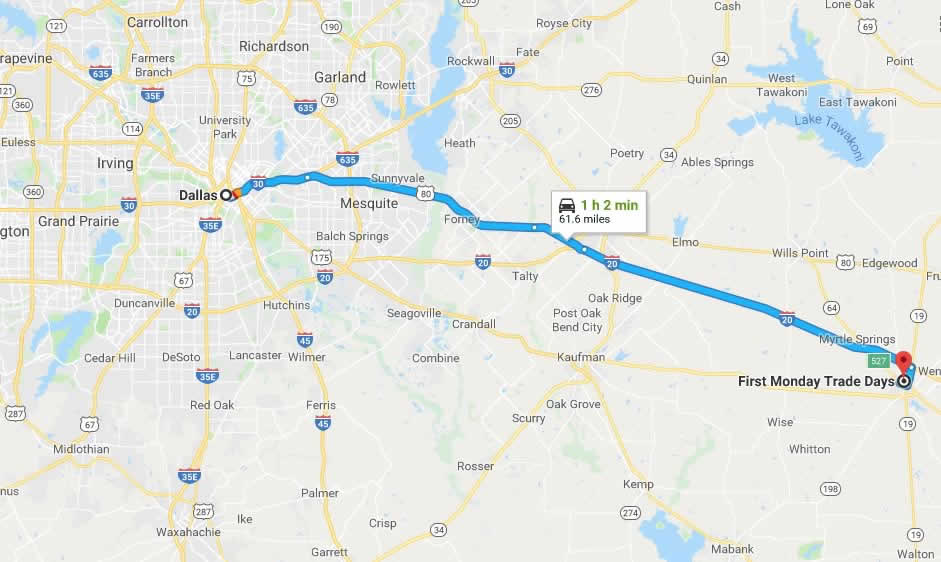 Several hotel and motel properties are located in Canton. We have no affiliation with any property, but provide the following reviews at TripAdvisor to give you a starting point for selecting your lodging accomodations:

Lodging in Nearby Tyler

Many visitors to First Monday also choose the wide variety and greater number of hotels and motels available in nearby Tyler which offers hotel properties such as Courtyard by Marriott, Residence Inn, Holiday Inn, Hilton Garden Inn, Homewood Suites, Staybridge Suites and other popular brand names.

Several B&B properties are located in the Canton area. We have no affiliation with any property, but provide the following reviews at TripAdvisor to give you a starting point for selecting your B&B accomodations:

Other Attractions and Things to Do in/near Canton Texas

There are a variety of attractions and things to do inand around Canton after flea market shopping at First Monday Trade Days.

Other popular Canton area attractions include Zip the USA, home of the longest zip lines in Texas. And just to the west of Canton on I-20 is Splash Kingdom Water Park, a great place for family fun.

And the Canton Autumn Stroll Festival is held each October in downtown Canton.

Canton also holds The Van Zandt County Fair and Rodeo and an Annual Bluegrass Festival, which takes place in August. Canton has also been the host community for the United States Equestrian Drill Championship, which showcases top color guard and mounted drill teams from throughout the country.

We shop in Canton not only during First Monday flea market weekends, but at other times as well, frequenting the shops around the square downtown.

And the Paul Michael Company is a regular stop we make when shopping for home furnishings, any day of the year in Canton!

For golfing enthusiasts, located nearby Canton are the Twin Lakes Golf Course and Garden Valley Golf Resort, as well as the Van Zandt Country Club.

East of Canton on FM 279 is the small, historic community of Ben Wheeler, known as the home of the Feral Hog Festival in the fall.

A few miles further east is the community of Edom, at the intersection of FM 279 and FM 314. It's a lovely small community of restaurants, art galleries, shops, farms, retreats, B&Bs and more. Edom is also the home to spring and fall art shows well known in all of Texas.